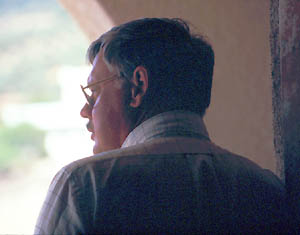 The Department of History, Archaeology and Social Anthropology of the University of Thessaly and its Laboratory of Archaeology, have received an important donation, the archives and library of the late William D.E. Coulson. We plan to make these archives accessible to all academics within about one year from today and wish to mark this event with a Symposium in memory of W.D.E. Coulson to be held at the University of Thessaly. This event will also give Willy's friends and colleagues an opportunity to pay him tribute for his contribution to the study of Early Iron Age Greece.

More than fifteen years ago, W.D.E. Coulson published a paper titled The Greek Dark Ages. A review of the evidence and suggestions for future research (Athens 1990). There, he posed a series of questions related to some of the major research problems regarding the Greek "Dark Ages" which he deemed, in a wider sense, as the period spanning roughly 1125-700 B.C. These questions were either Archaeological in nature, such as the nature and transition from LH (or LM) IIIC to Early PG, the existence or not of the Dorians, the development of architectural forms and materials, or Environmental, such as the state of the environment, land use practices, health, diet, and in general how man used natural resources during the Early Iron Age. In the process of pursuing well planned excavations with the goal of constructing a complete picture of a given settlement, he emphasized the urgent need for the re-examination of old excavation data and, especially, the need for new publications. He also underlined the importance of ethnography in the understanding of the society and the environment of the Early Iron Age.

Today, much progress has been made through excavations, surveys, various studies, symposia, and publications towards understanding the period between the end of the Late Bronze Age and the rise of the "polis". Thus, the aim of this meeting is twofold: To address these issues and other related topics through papers spanning multiple disciplines, and to present the results of new significant excavations, to present unpublished material deriving from old excavations, to discuss and assess the importance of new finds of the period between the end of the Bronze Age and the 7th c. B.C., and to discuss old and new ideas and theories about Early Iron Age Greece.

© 2006-7: Department of History, Archaeology and Social Anthropology - University of Thessaly